Bernoulli's for the Birds

The floating ping-pong ball activity helps to explain Bernoulli’s Principle (pronounced Burr-new-lee). Bernoulli was an 18th-century Swiss mathematician. He discovered that as air moves around an object, different air speeds create different air pressures. Faster moving air produces less pressure on an object. Slower moving air produces more pressure. He found that the faster air flows over the surface of something, the less the air pushes on that surface, and the lower its pressure. The air from the hair dryer flows around the outside of the ball and, if you place the ball into the middle of the stream of air, the air flows evenly around each side of the ball. The ball stays in the stream of air because it is at a lower pressure than the air that is not moving on the outside. If the ball tries to move out of the stream of moving air, the non-moving air is at a higher pressure, and will push the ball back into the fast-moving stream of air.

While this is happening on the sides of the ball, air from the hairdryer is pushing up on the ball from below. Meanwhile, gravity is also pulling the ball downward with a force proportional to its mass. Usually, the upward force from the hairdryer is nearly equal to the downward push from gravity.  When this happens, the upward, downward, and sideways forces acting on the ball are balanced and, as a result, the ball hovers unexpectedly in midair. 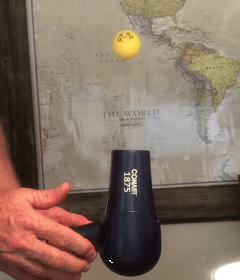 Bernoulli's for the Birds Resources 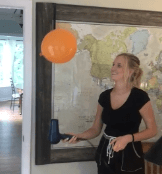 Bernoulli's for the Birds Lesson Plan