Hot air balloons are designed based on the fact that warmer air is less dense than cooler air.  Essentially, hot air is lighter than cool air because it has less mass per unit of volume.   In this experiment, as the air heats in the trash bag, the air molecules speed up and spread out becoming less dense (lighter) than the surrounding air in the room.  Since the air in the bag is now less dense than the air in the room, it begins to lift.   As the students will see and feel, the warm air fills the bag and, when released, it slowly rises toward the ceiling.   Once the rising air cools, the bag and the slowing particles drop rather quickly back to the ground.

With respect to weather, rising warm air in the atmosphere also brings with it water that has evaporated from the surface of the earth.   When this water cools and condenses at higher elevations, it often forms rain or snow which then fall back to the earth’s surface along with the cooling (and denser air). 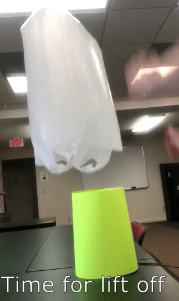 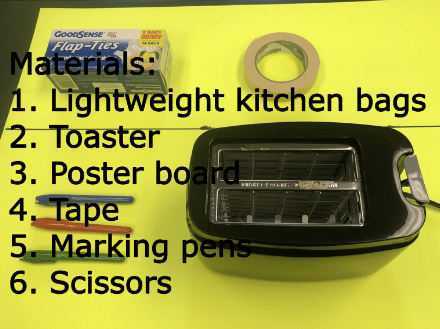